We're on another extended cruise. Rather than from Seattle WA to Skagway AK, we’re headed from Boston MA to Québec City QE and back, on a fourteen-day roundtrip.

This time, poor Clara had to remain behind since the autumn foliage voyage departed long after she had began her senior year in high school. Dad had agreed to serve as backup cameraman in her absence, with Mom again coming along to keep both of us out of trouble.

What’s in Eastern Canada that we hadn’t already seen in the Yukon and British Columbia? Why, fall colors, and luscious lobsters, and lofty lighthouses, and rocks sticking out of the sea, and bears and moose, and colonial citadels, and inspiring basilicas, and giant fiddles, and scenic coastal drives, and national parks and historic sights where our two countries began.

The food on our cruise ship, the Norwegian Dawn, is all that you wish to eat and is served as often as you wish to eat. Some restaurants on the ship are free, but others levy a moderate surcharge. I don’t care whether it’s prime rib, or steak, or lobster, or both, I’m going to enjoy it and see all that there is to see between Boston and Québec City.

By and far, our best moment came near the end of our voyage, that of Acadia National Park in Maine and a horse-drown wagon ride through its beautiful forests, where we saw the most incredible autumn colors of all.

The songs, Revolution, by the Beatles, Cape, Breton Silver, preformed by Allister MacGillivray and Back On The Road Again and Blue Eyes Crying In The Rain, performed By Willie Nelson, were legally purchased and downloaded from the iTunes Store for the express purpose on inclusion in this publication. 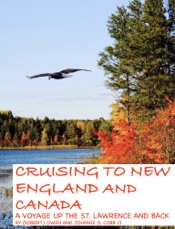