Does a ghost from the past want the man of her future?

Callie is thrilled when she inherits a house in the small town of Shadow Valley. The house is old and creaky, but she's not afraid of hard work. Unfortunately, no matter how many repairs she makes, the strange noises won't go away. Cold spots appear. Lights flicker. Footsteps sound down the hallway. Her nerves are soon so frayed that she resorts to calling the one person in town she hasn't been able to get along with, bullheaded police chief Carter Landry.

Carter doesn't have time to investigate things that go bump in the night—although, with Callie, the idea is tempting. He's busy working with the governor's task force on a major case and dealing with a rash of petty Halloween crimes. He knows that Callie's house isn't haunted… no matter what town legend says.

Still, when her distress call comes in, Carter is quick to respond.  He may not believe in ghosts, but someone is intentionally scaring the sassy blonde. And he doesn't like it. As he investigates, the friction between the two of them ignites into passion… and the strange occurrences in the house subside. But could Carter's presence be the reason? Callie fears that her sexy cop may be the one the ghost has wanted all along. 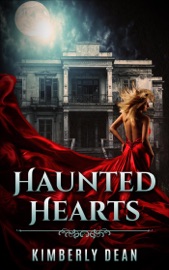