Thich Nhat Hanh, the Vietnamese Buddhist Monk is a world famous peace activist. As the first to introduce ‘Engaged Buddhism’, Thich Nhat Hanh is currently residing in South France’s Plum Village spiritual community. During his studies in Princeton, he supported the non-violent activities to establish peace in Vietnam after the civil war. Moving to France, he created a monastic and lay group called Order of Interbeing and Unified Buddhist Church. It was later developed in 1982 as the famous vihara and zen center called the Plum Village in South France.
His books ‘Peace Is Every Step: The Path of Mindfulness in Everyday Life’, ‘The Miracle of Mindfulness’ and ‘You Are Here: Discovering the Magic of the Present Moment’ were among the best sellers all around the world. Thich Nhat Hanh was nominated for the Nobel Peace Prize in 1967. Here we are presenting you the most blissful and peaceful words of the Buddhist monk who always stood for concord and humanity. 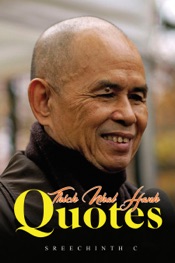