Something lurks in the black waters surrounding Mossley Island. An arcane and eldritch horror. For 50 years, it's waited. Fading into myth. Allowing those who fought off its last invasion to succumb to age. Now, with the island all but unprotected, this ancient evil prepares to mount one last attack.

SPOILER-ALERT! From Away is a continuing story told in serial format. It's strongly recommended you go no further, until you've read Books One through Five.

In the penultimate installment of this serialized story, the Hunters seek revenge against those who abruptly terminated their search for the island's buried treasure, while Wanda narrowly evades capture after she and Netty discover a blood-soaked Trevor at the scene of the Dunroamin Trailer Park Massacre, unable to recall how he got there.

Recovering from his near-fatal underwater ordeal – while grappling with revelations about the truth of island history which he had assumed to be mere legend – Ren resolves to ensure his daughter's safety by forcing her to return the mainland. Determined to stay and desperate for sanctuary, Dawn seeks out the help of the sisters of St. Neot's, even as they prepare for a move of their own.

Despite her stubborn stand against the Old Men's unjustifiable demands, Sylvie is pressured into leading a foolhardy expedition through treacherous waters in search of a fresh specimen, while the rapidly deteriorating senior citizens attempt to secure a new and unproven cure for what ails them. One which may well prove to be their undoing.

Featuring creepy nuns with mysterious motives, a sinister cabal of strangely robust senior citizens, and a militia of lighthouse keepers watching the ocean in case unspeakable terrors rise from the depths, this eerie seven-part serial will draw readers in with atmospheric tension and surprising twists, and refuse to let go as it hurtles towards a startling cliffhanger conclusion sure to leave everyone desperate for the next gripping chapter. 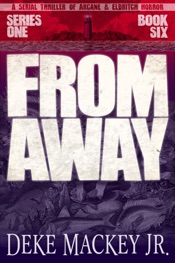