This meticulously edited book brings you the complete works of an influential Scottish-American naturalist, author, environmental philosopher, glaciologist and advocate for the preservation of wilderness in the United States of America, known as "John of the Mountains" and "Father of the National Parks". This exceptional collection is comprised of Muir's travel memoirs, wilderness essays, environmental studies and personal letters.
Contents:
Books
Picturesque California
The Mountains of California
Our National Parks
My First Summer in the Sierra
The Yosemite
Travels in Alaska
Stickeen: The Story of a Dog
The Cruise of the Corwin
A Thousand-mile Walk to the Gulf
Steep Trails
Studies in Sierra
Articles and Speeches
The National Parks and Forest Reservations
Save the Redwoods
Snow-storm on Mount Shasta
Features of the Proposed Yosemite National Park
A Rival of the Yosemite
The Treasures of the Yosemite
Yosemite Glaciers
Yosemite in Winter
Yosemite in Spring
Edward Henry Harriman
Edward Taylor Parsons
The Hetch Hetchy Valley
The Grand Cañon of the Colorado
Autobiography
The Story of My Boyhood and Youth
Letters to a Friend
Tribute
Alaska Days With John Muir by Samuel Hall Young 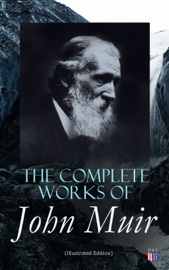