"This book vividly captures vital and imaginative lessons from one of the most influential and joyous traditions of contemporary actor training. Any actor or teacher, who is devoted to the transformational power of the theatre, will want to return to these pages again and again, finding in them not only the work to be done, but also the inspiration to do it."
James Bundy - Dean, Yale School of Drama; Artistic Director, Yale Repertory Theatre

Movement training techniques allow actors to acquire the physical body language and non-verbal skills to clearly express the ideas and emotions of their characters. The techniques contained in this book help actors to develop awareness of their own natural posture, walk and rhythm, release the physical imagination and transform into the characters they are portraying, on stage, in film or on television.

The book is illustrated with photographs throughout and contains a DVD featuring over an hour of movement exercises further demonstrating the techniques.

Movement Training for Actors is a masterclass on movement written by experienced coach, Jackie Snow and a culmination of her many years of teaching and coaching professionals. The highly practical approach will suit actors of all abilities as well as serving as an inspirational teaching guide. 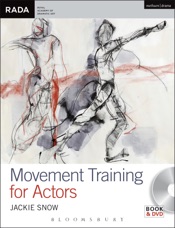