US Marshal Ellie Jameson has moved on since a one-night stand with hot law student Sam Creed, a night he’d made her believe was so much more. She hardly ever thinks of him. Really. When assigned to a new case, she’s blindsided and comes face to face with the man who broke her heart. Federal judge Sam Creed is being threatened by domestic terrorists, and guess who’s assigned to pose as his fiancée? Good thing thirteen years was long enough for him to forget she ever existed.

Nothing’s more important to Judge Creed than the rule of law. His focus is bringing an extremist militia group to justice. Having a marshal pose as his girlfriend was his idea, but when Eleanor Jameson moves in with him, he finds her damned distracting, and he’s having a hard time remembering their engagement isn’t real. As the stakes get higher, Sam finds that love has a way of changing life’s priorities. 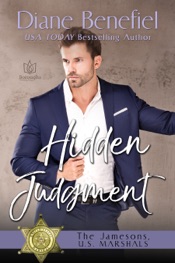