At first, David and Evan found their silver lining in togetherness, but as the months wore on, it became easier to forget to pay attention, to forget the necessity of deliberate connection. David’s seven-months-of-quarantine breakdown wasn’t, as one might expect, about the outside world, but instead about loneliness even in partnership. David and Evan recommit to finding the silver that lines togetherness; coming to each other with love and intent over, and over, and over again. 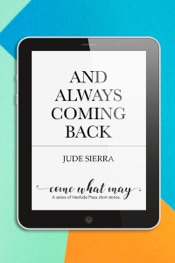