When the 506th Infantry Regiment—known since World War II as the Band of Brothers—returned to Colorado Springs after their first tour in Iraq, a series of brutal crimes swept through the city. The Band of Brothers had been deployed to the most violent places in Iraq, and some of the soldiers were suffering from what they had seen and done in combat. Without much time to recover, they were sent back to the front lines. After their second tour of duty, the battalion was renamed the Lethal Warriors, and, true to their name, the soldiers once again brought the violence home.

Lethal Warriors brings to life the chilling true stories of these veterans—from their enlistment and multiple tours of duty to their struggles with ptsd and their failure to reintegrate in society. With piercing insight and employing his relentless investigative skills, journalist David Philipps shines a light not only to this particular unit, but also to the painful reality of ptsd as it rages throughout the country.

By exploring the evolving the science and the stigma of war trauma throughout history—from "shell shock" to "battle fatigue" to "combat stress injuries"—Philipps shows that this problem has always existed and that, as the nature of warfare changes, it is only getting worse. In highlighting the inspiring stories of the resilient men and women in the armed forces who have the courage to confront the issue and offer a potential lifeline to the soldiers, Lethal Warriors challenges us to deal openly, honestly, and intelligently with the true costs of war. 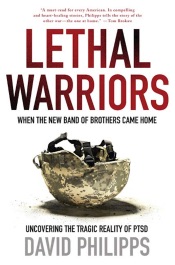