In The Great Inversion and the Future of the American City we travel the nation with Alan Ehrenhalt, one of our leading urbanists, as he explains how America’s cities are changing, what makes them succeed or fail, and what this means for our future.
Just a couple of decades ago, we took it for granted that inner cities were the preserve of immigrants and the poor, and that suburbs were the chosen destination of those who could afford them. Today, a demographic inversion is taking place: Central cities increasingly are where the affluent want to live, while suburbs are becoming home to poorer people and those who come to America from other parts of the world. Highly educated members of the emerging millennial generation are showing a decided preference for urban life and are being joined in many places by a new class of affluent retirees.
Ehrenhalt shows us how the commercial canyons of lower Manhattan are becoming residential neighborhoods, and how mass transit has revitalized inner-city communities in Chicago and Brooklyn. He explains why car-dominated cities like Phoenix and Charlotte have sought to build twenty-first-century downtowns from scratch, while sprawling postwar suburbs are seeking to attract young people with their own form of urbanized experience.
The Great Inversion is an eye-opening and thoroughly engaging look at our urban society and its future. 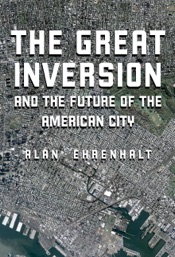