It was the end of an era, the last season before the surge of professional football began to lure the nation's best young student-athletes away from the military academies. That fall, the Black Knights of Army were the class of the nation. Mark Beech, a second-generation West Pointer, recounts this memorable and never-to-be-repeated season with:

- Pete Dawkins, the Heisman Trophy winner who rose to the rank of Brigadier General
- The long -Reclusive Bill Carpenter, the fabled "lonesome end" who earned the Distinguished Service Cross for saving his company in Vietnam
- Red Blaik, who led Army back to glory after the cribbing scandal and had the field at Michie Stadium named in his honor

Combining the triumph of The Junction Boys with the heroics of The Long Gray Line, Beech captures a unique period in the history of football, the military, and mid-twentieth-century America. 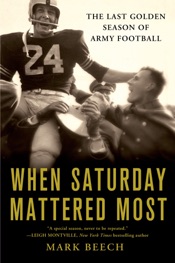