While still a teenager, Patrick Leigh Fermor made his way across Europe, as recounted in his classic memoirs, A Time of Gifts and Between the Woods and the Water. During World War II, he fought with local partisans against the Nazi occupiers of Crete. But in A Time to Keep Silence, Leigh Fermor writes about a more inward journey, describing his several sojourns in some of Europe’s oldest and most venerable monasteries. He stays at the Abbey of St. Wandrille, a great repository of art and learning; at Solesmes, famous for its revival of Gregorian chant; and at the deeply ascetic Trappist monastery of La Grande Trappe, where monks take a vow of silence. Finally, he visits the rock monasteries of Cappadocia, hewn from the stony spires of a moonlike landscape, where he seeks some trace of the life of the earliest Christian anchorites.

More than a history or travel journal, however, this beautiful short book is a meditation on the meaning of silence and solitude for modern life. Leigh Fermor writes, “In the seclusion of a cell—an existence whose quietness is only varied by the silent meals, the solemnity of ritual, and long solitary walks in the woods—the troubled waters of the mind grow still and clear, and much that is hidden away and all that clouds it floats to the surface and can be skimmed away; and after a time one reaches a state of peace that is unthought of in the ordinary world.” 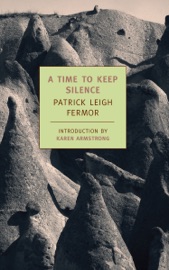