Two decades of lockouts, soaring ticket prices, and on-ice tinkering have convinced many hard-core fans that the NHL’s long-time commissioner Gary Bettman is the devil in disguise, but this book examines his motivations, peels back his often prickly demeanor, and explains how he manages to lead, confound, and keep order. It details the unlikely ascension of a fatherless Jewish kid from Long Island—who never played hockey and can barely skate—to the sport’s biggest job. The seven-fold increase in gross revenue during Bettman’s 20-year tenure as NHL commissioner makes him a business success story, and on his watch, professional hockey has also expanded far beyond its regional strongholds. By taming the NHL’s famously fractious owners, all but busting its players’ union, and enforcing a lawyerly discipline even on trash talk, Bettman has become a figure of almost unrivaled power in the business of sports, and this biography delves into how his influence shapes rival leagues in other countries, dictates the schedule of the Olympic Winter Games, and spills onto the ice itself. 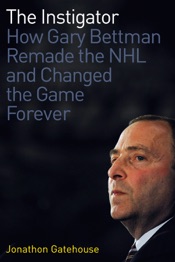