Claiming Quinn has a NEW COVER, but don't worry - the same story inside.

All Silas wanted was a quiet evening at home. He definitely didn’t want to be sucked into some weird, alternate world and then captured by a tribe of warrior women. As the women bring Silas and his friends to their city for the claiming ceremony, they begin to realize how treacherous their new lives are. Warring tribes, strange creatures and powerful magic are only a few of the dangers in this new world.

As the head of the Queen’s Guard, Quinn’s orders are simple – capture those who appear in the orb and bring them to her Queen. And just because her new prisoner and his demanding touch resurrect feelings she believed were long dead, doesn’t mean she can disobey her Queen’s orders. Men are the claimed ones in this world and allowing Silas to claim her would be a grave mistake.

In a world where men serve only one purpose, Quinn and Silas must hide their desire for each other. They grow closer with each passing day but Silas’ determination to return to his own world and the secrets Quinn keeps could tear them apart.

Note: This is Book Five in the Other World Series. It is a stand-alone story and you do NOT have to read Books One to Four before reading this one.

Author’s Note: This book contains explicit and steamy sex scenes that may not be your cup of tea. It is intended for mature readers only. 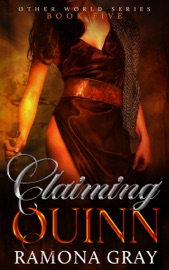