In 1943, sixteen-year-old Paul Steinberg was arrested in Paris and deported to Auschwitz. A chemistry student, Steinberg was assigned to work in the camp's laboratory alongside Primo Levi, who would later immortalize his fellow inmate as "Henri," the ultimate survivor, the paradigm of the prisoner who clung to life at the cost of his own humanity. "One seems to glimpse a human soul," Levi wrote in Survival in Auschwitz, "but then Henri's sad smile freezes in a cold grimace, and here he is again, intent on his hunt and his struggle; hard and distant, enclosed in armor, the enemy of all."

Now, after fifty years, Steinberg speaks for himself. In an unsparing act of self-examination, he traces his passage from artless adolescent to ruthless creature determined to do anything to live. He describes his strategies of survival: the boxing matches he staged for the camp commanders, the English POWs he exploited, the maneuvers and tactics he applied with cold competence. Ultimately, he confirms Levi's judgment: "No doubt he saw straight. I probably was that creature, prepared to use whatever means I had available." But, he asks, "Is it so wrong to survive?"

Brave and rare, Speak You Also is an unprecedented response to those dreadful events, bringing us face-to-face with the most difficult questions of humanity and survival. 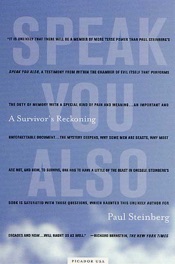